During September a group of friends has organized an event to get people out of their ruts and weaving. The First Inaugural Weftember. I had a couple of options for participating, I could try and resurrect my broken and annoyingly wonky Beka rigid heddle loom, I could make something on the inkle loom, I could work on my Andean Backstrap weaving, or I could use my tablets to make a tablet woven band. I decided to use the lovely tablets that were picked up for me at a festival last year and attempt tablet weaving (or cardweaving) after at least 20 years of not having done it. I spun up some Shetland X Border Leicester fleece into a fine shiny two ply and made 7 100 yard skeins and 1 140 yard skein, like so. 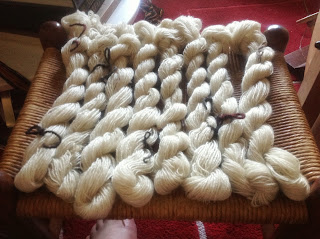 Then I handed them of to my friend The Spinning Daisy to work her color magic on. I chose four colors and asked her to choose four and this is the fantastic result. 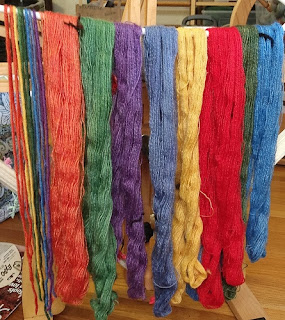 I spun up some additional white yarn and then I set to work and threaded a beginner pattern and started weaving. I was able to make a band and I learned a great deal, such as my yarn needs to be plied tighter to avoid sticky threads, tablet weaving is structurally super interesting, and I liked it, but I would rather be spinning. Instead of adding plying twist to these yarns, I am thinking of making a Medieval Brick Stitch piece with them, and should purchase some canvas to start stitching. Here is a photo of the band in progress. 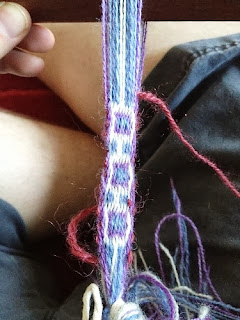 I have been troubled with some carpal tunnel flare ups, so I have not been spinning as much as I normally do, but I did some dyeing with walnuts that my mother had a friend save for me. Here is the result on a couple of skeins of yarn and some horned dorset fleece. 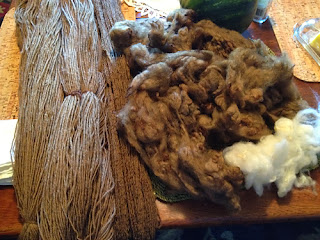