I like alliteration and for September I have a goal to use up some of my stash and make a concerted effort to move some along from raw fiber to prepared fiber, from prepared fiber to yarn, or yarn to finished object.
As August wound down, I found myself looking through bins of yarn and especially drawn to my bin of yarn which holds my natural dye experiments.
I had a great deal of hog island two ply yarn, spun for knitting, which I had been dyeing over the past three years. It was inspiring me to try and make a fair isle vest and so at the end of August I sat down with colored pencils, a book of peerie and border charts, and some graph paper trying to figure out what I could make with the colors I had.
I ended up with this 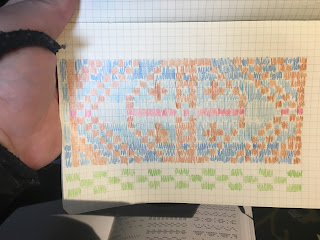 Once I had the chart, I knitted a gauge swatch and then took that to the Knitters Handy Book of Patterns to plug it into the V neck vest pattern. I have knit this pattern before and enjoy wearing it. Since I am doing fair isle colorwork I want to knit in the round and will just steek the armholes and vee neck rather than knit flat.
I was too excited to wait until September to begin and so cast on immediately. I began August with two repeats of the chart completed and will definitely finish in September. 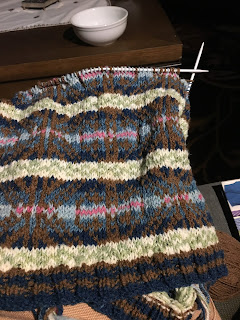 In the rest of September I plan to spin up some recently dyed Polwarth/Silk roving, spin up the tunis fleece I dyed last month, and get some cotton spun.
Posted by Devin at 5:38 PM

Hi Devin, I really enjoyed your cording article in Spin Off magazine, and saw your blog listed there. Looking through your posts - very inspiring! I noticed we use the same Lendrum wheel, and was wondering do you find that it gets dry or makes noises during our harsh Midwestern winters? I got some wheel oil but am afraid to apply it (not that I can identify the source of the noises all that well). I have tried the Ravelry forums but just get lost. Thank you for your inspirational projects! Deanne

Would you post a photograph of your Sept Stashdown vest when it was finished? I love wearing vests, but hadn't thought of steeking the armholes and neck. I'd like to see how you did it. Your pattern and colors look absolutely beautiful!
Charlotte