Getting Back into the Habit of Blogging

I was just in a conversation with friends, mourning the demise of the blogging community which was so vibrant and active in the late nineties and early two thousands. Hypocritically, of course, as I do not update my own blog. Whilst I do love looking at all the pretty photos on Instagram, I miss the discussions and mini essays that were the glory of the fiber blogging world. I miss seeing the in-depth exploration of a topic or a technique, and also just the better insight into what was going on in my friends' studios.
So. It has been a busy year. Today I am going to discuss my biggest accomplishment.
I finished the cotton cloth, and made a shirt from it: 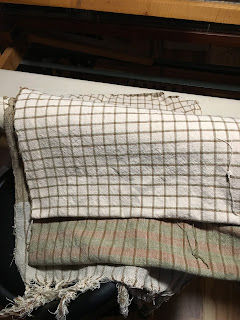 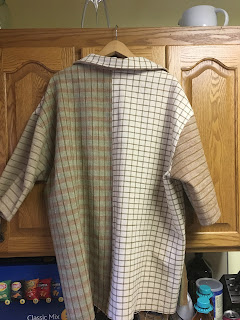 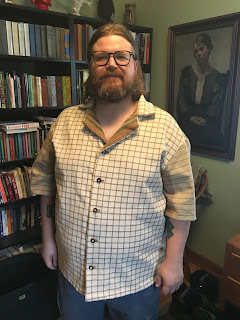 I learned many things on this project. Biggest of all is the importance of planning rather than estimating. I estimated that I had enough yarn to finish my shirt warp in the pattern I began, however I ran out of the white cotton halfway through. I had a little bit left to spin up and I did that, but I still had over two yards of warp left to weave and no weft to weave it with. In order to finish I started using whatever cotton sliver I had to hand to spin up, and ended up making several different patterns as I finished the warp, green and brown stripes, tan stripes, brown stripes. I ended up with enough cloth to make the shirt but not enough to be able to make it according to my initial plan.

I chose, after much coaching and encouragement from weaving friends, to look on this as serendipity and embrace the different patterns to put them together into one shirt.

This was my first time making a garment. I sat on the cloth, paralyzed by indecision and intimidated by the process of dealing with sizing up the pattern. I needed to add several inches to the width of the garment. Luckilly I had a friend staying with me while he taught locally and he walked me through the process and helped me make a muslin to check the fit of the adjusted pattern piece. Once that was done I spent the better part of a day laying out the pattern pieces on the cloth and trying to decide what the most attractive arrangement of the various cloth patterns would be. In the end I am very pleased and I feel that the shirt is better for having the mix of patterns than for being all in tattersall like I had initially planned. My mistake turned into serendipity.

Sewing the shirt together went quickly and I, as you can tell, and super pleased with the result. It had been my goal since I was eight or nine to make a shirt from scratch--all the way from spinning the yarn through weaving through sewing it. It was a lot of work, all together I spent more than 150 hours on it, but it was completely worth it and I am already planning a series of handspun, handwoven shirts and other garments to make.

The biggest thing about this shirt is that it would not have been made without the encouragement, the cheerleading, the teaching, the hand holding, the explanations, the suggestions and the consolation of my friends in the fiber community. In the end, not only do I have a garment that I love to wear because of my own accomplishment, it also feels like I am wrapping myself in the whole group of friends and teachers that have been so instrumental in my fiber journey.
Posted by Devin at 7:08 AM

I just caught up on the Fall 2018 issue of Spin Off and enjoyed your article on long-haul spinning for a big project, so that reminded me to check your blog, which I always enjoy. Congratulations on that wonderful shirt! It's really beautiful, and you must be incredibly proud of it. Welcome to the Slow Clothes movement! Doesn't it give you a whole new perspective on what it takes to have a wardrobe if you're not buying off the shelf? The discipline, the labor, the creativity, the determination it takes to finish a long project all put you in a very select cadre of artisans. And all the decisions to make along the way, that's the kind of thing that stops a lot of people. You have to be willing to keep thinking and re-evaluating, so you can use what you have in your hands. Keep up the good work and keep us posted, and please do keep on writing. It's always great fun to see what you're up to. With warm best wishes,
Meg

It's a great shirt! I've got a lot of those natural colored cottons and have always planned to do a project with them some day. It will likely have to wait a bit longer, as I'm in the process of moving. I do like spinning cotton, on spindles or wheels.

I received my Spring 2019 Spin-off magazine last night. I read your article immediately. Like you, I have always dreamed of weaving cloth to sew into clothes (I wasn't a spinner until recently). But I had so many excuses, my loom wasn't wide enough, What if I messed up, and so on and so on.

You have inspired me to finally get busy. Thank you so much! And any the way, I shirt looks fantastic on you!
!